“Little by little you are seeing the plan fall into place. God’s plan is perfect, My child, and He will touch the hearts and minds of all those needed to see this plan come to fruition. All those willing to help are just awaiting ‘the call’. God has said, ‘You will not have to do anything, it will all be done for you.” 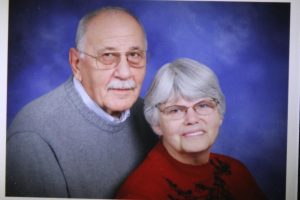 The History of the retreat center began with Jim and Ruth Ann Wade who were both educators in the Bloomington public school system. They gave up their home, their farm, and the future they had planned, dedicating the land to the Lord Jesus in honor of the Blessed Virgin Mary. It was Ruth Ann Wade who felt very strongly inspired to begin this retreat center in 1993.

Around the year 1990, Ruth Ann began meeting with her prayer groups in the basement of the Wades’ family home, and at the request of our Lord Jesus, their home and farm were blessed by their priest.

As the groups became larger and more pilgrims came to visit the Farm and to hear the Messages and Ruth Ann’s testimony, they would gather together outside, rain or shine, bringing lawn chairs and blankets. A life-size statue of the Blessed Virgin was given to Ruth Ann and became a focal point for the visitors.

An altar was provided for the pole barn (pictured to the right,) and the first Mass was celebrated in October 1993. In 1995, weekly Masses were celebrated every Saturday. Restroom facilities were added, as well as ample parking for the growing number of people coming to the Farm.

In 1993, the Stations of the Cross were erected, going along a path at the edge of the Farm, up to near the top of the hill. In addition, adjoining properties were bought by Mary’s Children at the request of the Blessed Mother to insure peace of the Farm as events continued to develop. In obedience to the directions Ruth Ann was being given in the messages, she and Jim moved out of their home and into a house on one of the newly acquired properties, leaving behind all but their personal possessions.

In 1995, plans for the Chapel (pictured to the left) that Our Lady had first spoken of back in 1993 began to take shape, with an architect’s plans and a building committee. The Chapel was to be built at the top of the hill. It was dedicated on October 18, 1997. That same year, as the Chapel neared completion, Ruth Ann was told through the Messages that it was time to upgrade the Pole Barn. After a complete renovation, the Pole Barn became what was used for several years as the main Conference Center.

In the following years…

In May, 1999, a retired priest moved to the Farm, living in the Wades’ former home. That same year, in October, the Farm was given permission to reserve the Blessed Sacrament at a room in the Retreat Center for Adoration.

In October, 2000, fulfilling Our Lady’s request for a place where pilgrims could rest their weary heads, the large two-story Guesthouse was completed and dedicated (pictured to the right.)

In May, 2001, the Rosary Path was dedicated, and the Stations of the Cross pathway paved and improved. A month later, at the request of the Blessed Mother, retreats dedicated to the Sacred Heart of Jesus began to take place on the first weekend of the month. On October 6, the new Bookstore was dedicated.

There were also changes for Jim and Ruth Ann, who moved from the house next door, away from the Farm, to make that home also available for priests.

On May 4, 2002, the new Dining Hall/Kitchen was dedicated and an infirmary was added to the Retreat Center.

In 2003, the Dining Hall Annex was completed, which served as an overflow dining area and the location for the children’s retreats.

In the following years… 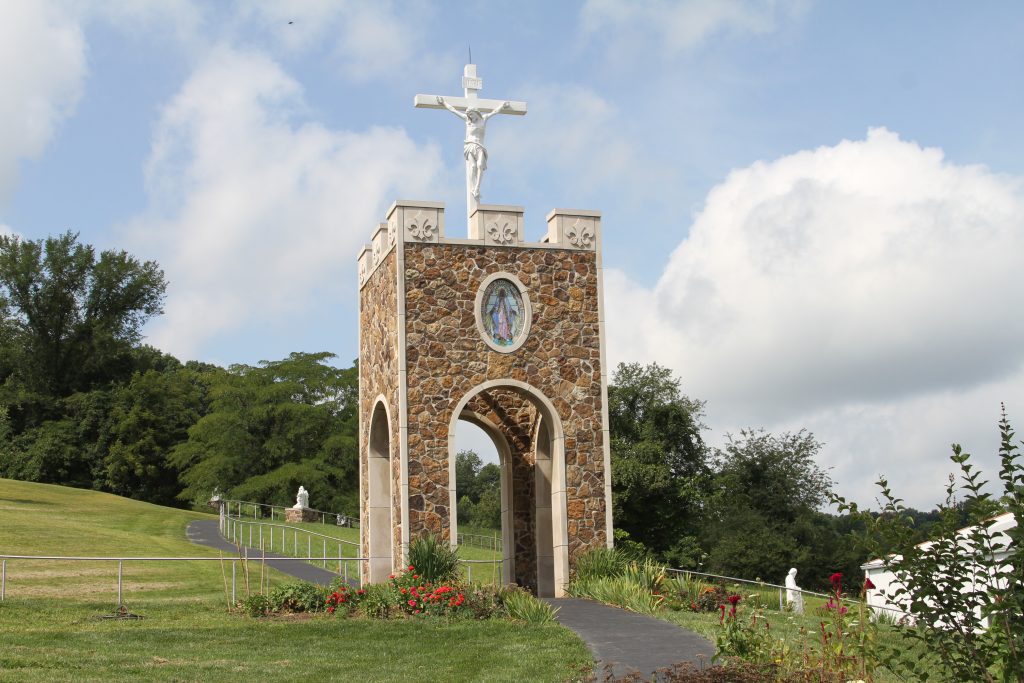 Construction continued at the Farm with an addition to the Chapel that contains seven confessional rooms.  Construction of a new Friary behind the chapel was also completed, and the Friary currently houses priests and brothers of the Franciscan Friars of the Immaculate, who serve the sacramental and spiritual needs of the Retreat Center.

The Sacred Heart Chapel was also renovated, with a redesign of the sanctuary, and the installation of stained glass windows.

A new Conference Hall (pictured to the left) was eventually built to take the place of the old pole barn.  The original pole barn building saw more renovations, and now serves as the current bookstore, while the old bookstore building (which had originally been a stable) was torn down.

Construction continues with a new memorial for the unborn being built near the end of the Stations of the Cross path.